Moving on Up: Apprentices on the Edge

The TMC Apprentice program is growing by leaps and bounds. This year saw a record 12 apprentices. Five of these young singers have come to the end of their TMC apprenticeships, and will be eligible to audition as full, adult TMC members for the 2015-16 season. We caught up with four “graduating” apprentices to chat about their plans for the future. 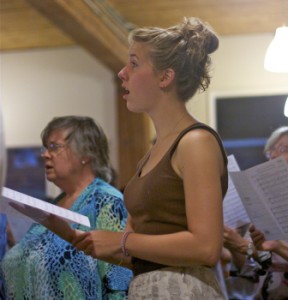 Among this year’s apprentices, Catherine Hough’s association with the TMC goes back the farthest—she joined in 2010. After a five-season apprenticeship, Catherine hopes to return to the TMC in the fall for the 2015-16 season. In addition to returning to the TMC, Catherine will be returning to school at Seneca King, studying Behavioural Sciences. She also plans to take voice lessons, to boost her repertoire and improve her overall vocal performance, and says that she is excited for “outside the box” ideas.

Catherine calls her apprenticeship “a wonderful opportunity,” and says “I am fortunate to have been a part of the program for as long as I was eligible.” She adds that the voice lessons have made a great impact on her personal goals and achievements singing solo repertoire. A keen volunteer, Catherine also notes that helping and participating at most Singsation Saturdays was “a treat,” too! “I feel as if my social life is enriched—meeting new people every few months and welcoming them into the choral family.” 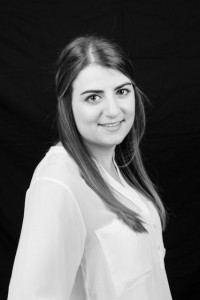 One the many great apprentices who joined the TMC for the 2014-15 season, Nicole Bernabei is just finishing up her degree in Classical Voice Performance at York University, and is also studying to be a music teacher in the school board. A piano and voice teacher, Nicole she is currently waiting to hear from school boards about teaching positions in the fall, when she hopes to be teaching full time and returning for another year in the TMC as a full member.

Nicole credits her TMC apprenticeship with teaching her many skills: singing with a symphony orchestra, which she says was “exciting,” as was singing at Roy Thomson Hall. Her choral skills also developed “I learned a lot more about working together as a choir and team; blending with each other, learning to breathe at different times from the person beside you to get the best quality sound and keep the sound really smooth and flowing,” as well as singing in different languages, and, of course sight-singing. ” I was always quite good at it,” she says, “but there were quite a few works that we sang this year that I had never sung before. Because of that, they required quick and efficient sight reading on my end to help me learn the piece a lot quicker and keep up to speed with the rest of the choir. I’ve noticed since September that this skill has gotten a lot better and I’ve really adapted to learning a piece quite quickly which I think is a great skill to have for any musician.” 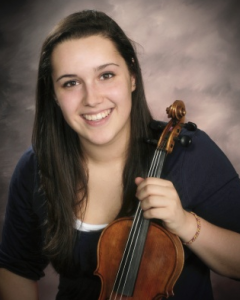 Music Therapist Chantelle Whiteside joined the TMC in 2014, after finishing her undergraduate degree in violin and music therapy. Outside the Choir, she works full time doing music therapy in Long-term Care homes around Toronto and the GTA, and teaches violin and piano.

The coming year will bring some exciting changes: Chantelle will be starting a part-time MA in Music Therapy through Berklee College of Music in Boston, gaining experience in Toronto, and spending a week per semester in Boston for further training. She is also working on finishing her Royal Conservatory of Music levels in violin and piano to get her ARCT. Chantelle also plans to further develop her music business, which involves music therapy, music lessons, adapted music lessons, and performing. Staying in Toronto means, among other things, that Chantelle is hoping to return to the TMC in the fall.

Chantelle credits her year of TMC apprenticeship and vocal coachings with helping her to better use her voice at work: “I never figured I’d be using my voice as much as I do! I felt as though my voice was out of shape, in a sense, as I hadn’t been singing chorally for five or so years. My voice felt tired and strained at the end of each work day. TMC helped me get back into good singing habits.”

Chantelle says that she chose to get involved in a choir instead of an orchestra because she wanted to be challenged.” TMC really challenged me,” she says, “I’ve never had to sing repertoire as difficult as what we did this season. It was exciting, but scary, for me to sing with vocalists who are so much more experienced than I am and it pushed me way out of my comfort zone—but, I’ve loved being there.” 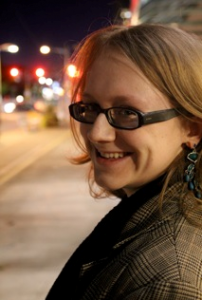 Emma is a multi-genre musician who graduated from York University. Her goal is to be a freelance musician and do “everything that music has to offer, including performing, teaching, and composing.” Right now, she adds, she is taking time to perform.

Emma’s next concrete project is to create a demo recording. Another goal is to get certified in a vocal pedagogy and care system for multi-genre singers, called Somatic Voice Work, which will enable her to teach lessons.

Of her one-year TMC apprenticeship, Emma says “the TMC reinforced for me that choir takes a lot of practising—so many people think that singers just kind of float around, but there’s so much rhythmic accuracy and knowledge and dynamic accuracy required. It’s not enough to just sing loud.” She adds that she thinks it’s important to know everything a voice can do, and that this year has definitely given her a better sense of that. Finally, Emma says, “It is also reassuring to see people from all walks of life who have managed to fit music into their lives at this level.”