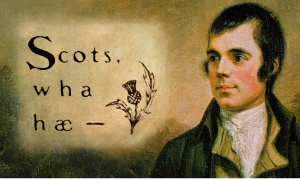 A popular song performed by the TMC many times during its first years was Scots Wha Hae, a patriotic song of Scotland written using both words of the Scots language and English. The lyrics were written by Robert Burns in 1793.  The Choir performed arrangements by Henry Leslie and P.J. Mansfield during many of its seasons between 1897 and 1927.