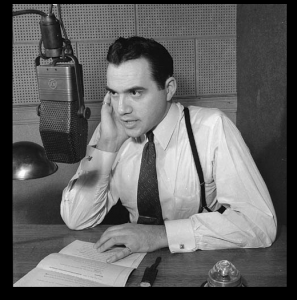 During WWII TMC participated, under Sir Ernest MacMillan, in Victory Loans fundraising concerts which were broadcast nationally on the radio. And in January 1946, the Choir performed in a special Remembrance Night concert at Maple Leaf Gardens with the TSO.  Legendary Canadian actor and broadcaster Lorne Greene was a narrator for a Victory Loans concert and the MC for the Remembrance Night. Although many know of Lorne Greene for his long-running role as Ben Cartwright on the Bonanza television show, some might recall that before that he was a newsreader on the CBC National News.  According to The Canadian Encyclopedia:  The CBC gave him the nickname “The Voice of Canada,” however, his role in delivering distressing war news in sonorous tones with his deep, resonant voice following Canada’s entry into WW II in 1939 caused many listeners to call him “The Voice of Doom” instead.