Returning to the Classics and Conducting Under a Microscope: Camaraderie, Choral Music, and Canadian Beer 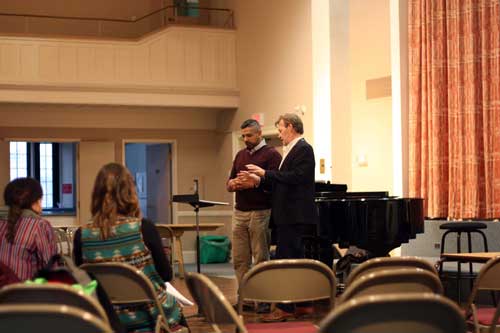 There comes a point in the career of a musician when the classes are over, the degrees are earned and the work becomes the inevitable focus of our professional lives. The decision to continue learning in any capacity rests solely in our hands. It is comforting to know that when that decision is made, there exists a program such as the Toronto Mendelssohn Choir’s Choral Conductors’ Symposium.

Along with four peers of impressive and vastly varying skills, I had the great privilege to be accepted to participate in the Symposium. From local and abroad, we gathered for the week, sequestered for long days of score analysis, in-depth discussions, humbling rehearsals, and a general geek-out over choral music, choral recordings, choral conductors, choral festivals ….

While the latter may only appeal to a select few choral music devotees, for my part, it was a revitalizing homecoming. My graduate work at the University of Toronto’s Faculty of Music had been firmly planted in choral/orchestral conducting; however, my current work is as a musical director for live theatre and music theatre education. I have retained associations with a few local “classical” choirs, but the chorus I conduct is a member of the Barbershop Harmony Society and requires an entirely different approach to music making than any organization with whom I’ve worked. I mention all of this simply to state that as someone who does not spend their time in “classical” choral music, the welcome I received from my fellow participants, Maestro Edison, and TMC team was staggering. I was exactly where I needed to be.

The deconstruction began without haste – each of us bringing to the table unique experiences that shaped our current method of music making (otherwise expanded as: the analysis, the gesture, the rehearsal, and the performance). The atmosphere was gracious; ideas being shared without judgment or one-upsmanship.

The real “fun” occurred during the rehearsals, first with the Elora Festival Singers and later with the entire TMC. Like a loathed cough medicine, the systematic attention given to one’s faulty techniques is distasteful to the core. Being laid to waste in front of former classmates and peers – people with whom you’ve shared grand stages, people who have been under your baton at some point, people you have split tipsy cab rides home with after performances – all of these people now sit before you as you are broken down and built back up again.

Honesty and practicality prevailed as the Maestro praised our skills and likewise targeted that which is useless, unclear or ridiculous. What made the week equal parts frightening and tolerable was not knowing which pieces you would be conducting until shortly before the rehearsal. This way, you could ascertain if, from piece to piece, you were able to improve on what Noel was offering or you were simply terrible and should switch careers. As I joke, I will say the mid-week energy of the five conductors sank as we each found frustration in our own rehearsals. But our morning discussions helped us find strength in each other’s frustrations and bolstered us for the remaining rehearsals of the week. And, as a reward for our perseverance, the pub next door flowed with pints of Canadian beer, white wine with ice cubes and Old Fashioneds.

The real reward, however, had yet to be earned. It was only on the day before the concert that we were finally told which four pieces out of our book of twenty we were each to conduct in front of a packed house. However daunting that may sound, it was the spark that lit the flame each of us had smoldering inside. No more trial-and-error in front of the choir, no more comments from the ornate, cushioned chair from where Noel delivered his critique and quips. Now it was time to perform!

For myself, I embraced the music chosen for me – some of which was exactly my wheelhouse, and others as far from my realm of study as I could imagine. This was very empowering – to think that I knew and understood how to bring this music to performance. And I witnessed the same in my colleagues. We incorporated the week’s training as best as we could and now, we could put our personal marks on each piece of music.

Imbued with our interpretations, our emotions, the final concert was quite a performance. I don’t think the choir expected to be so good. The conductors shined so much as a conductor should, but the concert was truly a success – the culmination of so many brilliant musical forces coming together for knowledge and love of music. The ever-watchful and remarkably responsive singers, the passionate soloists, the accomplished accompanist, and the guest organist, Noel’s curtain speech – personal elements of performance that can’t be taught around a board table. Choir members articulated to the musical moment where they could see the change in our conducting from the beginning of the week to that performance. And the accolades received after it was all over, from singers, audience members, and our teacher, Noel, was a reward I will cherish for a lifetime.

I am so grateful to have been selected to participate in this program. To anyone not in music, I describe the experience as being able to drive a Ferrari, even if just to Mississauga and back. It was a treat for this Theatre guy to live as a Choral guy for a week – it’s allowed me to open a few doors that have sat closed for a while. I commend TMC as music makers and as an organization for sharing your singers, your administrators, and your conductor with emerging artists such as my four colleagues and myself. It is a treasure to have such an organization in Toronto and I will not soon forget this amazing experience!