Matt Taylor is a DMA student at the University of Georgia, currently pursuing his degree in Choral Conducting on a Hoveland Choral Fellowship. Before moving to Athens, Georgia, Matt was an associate choral director at Wando High School in Charleston, SC, where he directed the intermediate and advanced treble choirs. Matt has served as a conductor for district and university honor choirs in South Carolina. He has led church choir workshops and directed high school choirs across the southeast as a guest conductor. Matt actively performs in collegiate, community, and professional choirs as a vocalist.

In addition to choral music, Matt is an active instrumentalist and composer. As a choral arranger he has produced works for churches, high schools, and universities. He holds studies in classical and jazz performance on the double bass. Matt currently serves as a member of the ACDA Southern Region Conference Committee. In 2022 he will be presenting at the ACDA Midwestern Region Conference in Chicago, IL.

Matt Taylor is a conductor in the 2022 TMC Choral Conductors’ Symposium and will conduct the full TMC and the Professional Core ensemble in the concluding Symposium concert on June 28, 2022. 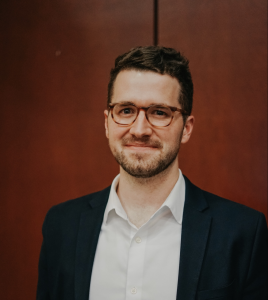