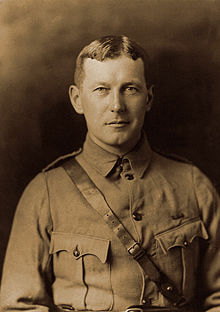 TMC has been part of Toronto life for 125 years so we are sure to have had many people notable in the life of Canada attend TMC concerts over those years. We were fascinated to learn that John McCrae attended our very first concert on January 15, 1895.

Lieutenant Colonel John McCrae, MD is best know for writing the famous war memorial poem In Flanders Fields.  He was a Canadian poet, physician, author, artist and soldier during World War I, and a surgeon during the Second Battle of Ypres, in Belgium. He died of pneumonia near the end of the war.

We learned from chorister Marlo Alcock, who found out through an acquaintance who is doing research on McCrae, that he mentioned our first concert in a letter to his mother. The Walter referred to is Walter Gow, first cousin of John McCrae. Walter was studying law at University of Toronto. In 1895 McCrae was in his first year of Medicine at U of T and also held a Fellowship in Biology (which meant that he taught students and did research). The work in the letter refers to the research he was doing in the lab at U of T.

Jan 15, 1895
From John McCrae to his mother Janet McCrae
“Walter decoyed me into going to the Mendelssohn choir to-night. I hate to miss work, but it will be one of the best concerts of the season I expect.”