The New Ears reviewer we had originally arranged did not claim his tickets for the sold-out Passio concert, so audience member Audra Williams agreed to share her experience listening to Pärt for the first time.

First thought:  I am torn between wanting to offer a scolding and offer a hug to the person whose smartphone made a “BLOOP!” new email sound that broke the heavy silence after the last crashing “AMEN” of this concert. We all know better, we’ve all made mistakes, and we can all do better.

Related advice: Shut off your phones, folks! Even if you already think you have!

Second thought: Big congratulations to the Choir for selling out this show. The room was crammed full, but in a way that felt cozy and connected, rather than crammed and awkward. It did get pretty overheated, though, as the show went on.

Related advice: Wear layers!! And don’t wear fleece tights like I did!

Third thought: If you don’t spend much time in pews (I sure don’t!) you might not be ready for how numb your butt might get after an hour and a bit. It’s a lot.

Related advice: When you take off your layers, sit on them!

On to the music!

I appreciated this starkness and deliberateness. It felt like a respectful telling of a story that many of us might have grown up with, but wouldn’t be able to necessarily recite to someone ourselves.  I liked that it didn’t demand an emotional investment from those in the audience who might not be believers, but instead presented a matter-of-fact telling of a usually melodramatic narrative.

I was taken aback by how little we heard of the chorus, overall. But then looking back on the program, we didn’t hear that much from anyone else either. There were a lot of big empty spaces between all the lines, and no one took centre stage for long.

The full choir served as kind of a Greek Chorus, singing crowd scenes and setting the stage, while the octet sang the role of the Evangelist, narrating the action. The dialogue took place mostly between Pilate, sung by the tenor, and Jesus, sung by the bass. Even the dialogue didn’t really feel like an interaction between the characters, perhaps because there was so much physical distance between them. Jesus (Jeremy Bowes), wasn’t actually on stage at all, but sang from a perch above the rest of the Choir.

This seemed like an odd choice to me, because it made him seem crucified from the get-go. I wanted more intensity from this character, and this positioning also removed him from the audience in a way that kept us from really connecting with what must have been a very charismatic character.

I also want to say that I wish we could all take a break from white people being cast as Jesus. I don’t think it’s good for us, as a culture. Many folks straight up think of him as having been a white dude, and even those who will acknowledge that this is historically impossible would still probably pick a blonde and blue-eyed depiction of him out of a pile of images when asked to identify which one was Jesus.

I don’t know if “The Evangelist” is always portrayed by a handful of people [ed: Generally, the Evangelist is a single soloist. Having a quartet or octet sing the narrative is an unusual compositional decision.], but this choice by Pärt was an effective contrast between the single voices singing the roles of Jesus and Pilate, and the many dozens of voices making up the chorus. I think those contrasts were necessary because the pacing and dynamic range of the work were consistent throughout, to the point where it felt oppressive at times, and I think some of the leaps from harmonic to dissonant chords escaped my notice. I confess to being thankful for the program to follow along in, because (unless you speak Latin!) there were no other indications of what was happening on stage.

As an atheist, I appreciated this concert most as a sonic experience. I was most swept away when the entire chorus was singing, because that’s when I stopped being aware that I was experiencing something unusual for me (a choral performance) and instead felt like I could connect on some core level with the beauty of what was happening in front of me.

That’s rare for me. Usually I am someone who connects more with narrative, and sighs disinterestedly when those around me talk about a film’s cinematography or sound design. All the more reason for me to be thankful for an opportunity like this one to step outside of the way I usually approach art, and work a different part of my brain for a while. It’s something we should all do as much as we can. The world is better for it. 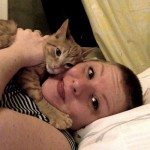 For her entire professional life, Audra Williams has been creating content that demystifies complex issues in order to provide an entry point for civic participation. This is what unites her work as an ASL interpreter, a speechwriter, and a digital strategist.