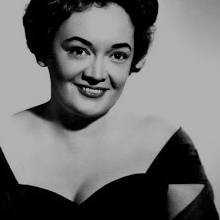 Lois Marshall was internationally regarded as one of the great sopranos of the 20th century. In 1947, at just 22 years old, and at the beginning of her career, she was engaged by Sir Ernest MacMillan as a soprano soloist singing, on three successive nights, the soprano solo work in the Toronto Mendelssohn Choir’s Bach festival in St. Paul’s Cathedral, Toronto. She sang the St. Matthew Passion, the B Minor Mass and the Magnificat accompanied by the Toronto Symphony Orchestra.

Marshall had a phenomenal range, spanning from F below middle C to F above high C and included both coloratura and mezzo-soprano arias in her repertoire. Her first encounter with Sir Ernest MacMillan was at her first Conservatory recital when she was thrilled that Sir Ernest MacMillan and Lady MacMillan attended and spoke kindly to her afterward. Sir Ernest was impressed by the young singer and invited her to make her debut the following season with his Toronto Symphony Orchestra at a secondary-school concert (she got laryngitis at the last minute and was crushed that she had to miss it.) Throughout the 1950s, she also sang Bach’s Mass in B Minor, Verdi’s Requiem and Handel’s Messiah with the TMC and TSO. Soon after her debut with TMC, Arturo Toscanini ­selected her to appear with the NBC ­Symphony Orchestra in a performance of Beethoven’s Missa Solemnis. In 1956 she made her London debut with the Royal ­Philharmonic Orchestra under Sir Thomas Beecham in a performance of Mozart’s ­Exsultate, Jubilate.

Lois Marshall remained closely connected to the TMC throughout her career and was named Honorary President of the Choir.  Lois was the narrator for the Choir’s opening concert in 1994, the start of its 100th anniversary season. She told the story of the TMC, interspersed with the Choir singing significant works from across its history.

In a memorial after her death in 1997, CBC broadcaster and conductor Howard Dyck wrote, “My fondest memory of her is the first time I heard her sing a live concert. Lois Marshall was in Winnipeg to sing Handel’s Messiah in the Civic Auditorium. Her delivery of the two main soprano arias, “Rejoice Greatly” and “I know that my Redeemer liveth”, will be forever etched in my memory as some of the most beautiful singing I have ever heard. Her performance that December night in 1962 ­inspired me and confirmed my decision to pursue a career in music.”

Here is Lois performing Handel’s Rejoice Greatly from the concert recording made with the TSO and TMC in 1952.