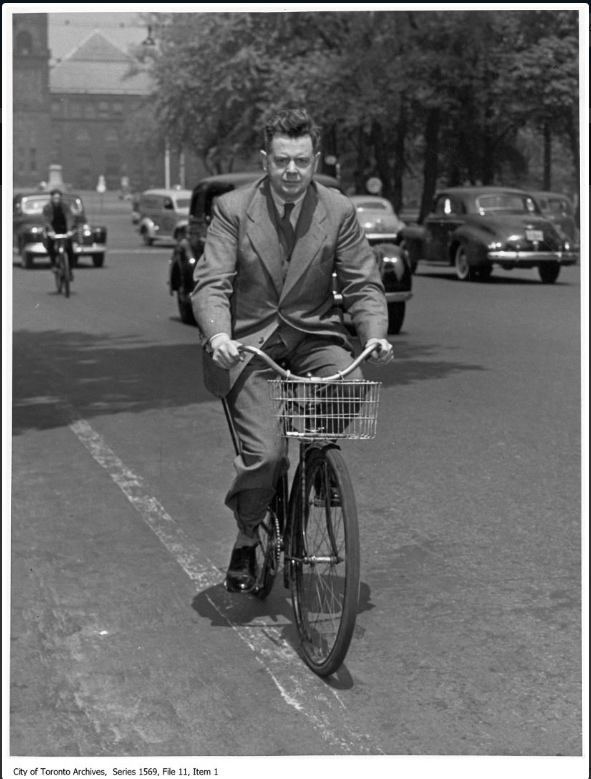 TMC’s third conductor was Sir Ernest MacMillan, Canada’s “Musical Knight.”  MacMillan had been knighted in 1935 by King George V, on the recommendation of the Prime Minister of Canada, R. B. Bennett, for his “services to music in Canada.”  He became TMC’s third conductor in 1942, just part of an illustrious and important musical career.  His occupations on Wikipedia are listed as: Composer, conductor, administrator, lecturer, adjudicator, writer, humourist, statesman.  And on the Canadian Encyclopedia, they are listed as: Conductor, organist, pianist, composer, educator, writer, administrator. He was busy.

Here are just a few of the milestones in MacMillan’s career.

MacMillan was born in Mimico in 1893.

At the age of 15 he took his first appointment, as organist at Knox Presbyterian Church.

Before his 18th birthday, he had completed his FRCO and the extramural B MUS from Oxford University.

In 1914, while studying piano in Paris, he went to the Bayreuth Wagner Festival (and thus in German territory at the outbreak of World War I), and was detained at Nuremberg for several months. During this period he composed almost the entire first version of his String Quartet in C Minor. He then became a prisoner of war at Ruhleben for the remaining war years. MacMillan led the small camp orchestra in concerts and accompaniments for camp musicals. He also concentrated diligently on composition and, through the Prisoners-of-War Education Committee, submitted a setting of Swinburne’s England, an Ode as part of the requirements for his D MUS from Oxford University.

On his return to Canada in 1919 he became organist-choirmaster at Timothy Eaton Memorial Church, Toronto.

In 1923 MacMillan amalgamated his Toronto Conservatory of Music choir and those of Richard Tattersall and Healey Willan and conducted Bach’s St. Matthew Passion in the first of 30 annual performances under his baton (with the TCM choir in the period 1933-42, and after that with the Toronto Mendelssohn Choir).

In 1926 he succeeded A.S. Vogt (TMC’s founder and first conductor) as principal of the Toronto Conservatory of Music.

As a TCM examiner and a festival adjudicator he made annual trips covering every region of Canada, directly encouraging more than a generation of Canadian students.

In 1927 he succeeded Vogt again, this time at the University of Toronto as dean of the Faculty of Music.

In 1931 MacMillan took over as conductor of the Toronto Symphony Orchestra, a position he held until 1956.

MacMillan was also an active composer and arranger. At our January 2019 Spotlight on North America concert, the Choir performed MacMillan’s arrangement of the Quebec folk song Blanche Comme la Neige.  Have a listen.

We love this Toronto Star photo of Sir Ernest riding his bicycle down University Ave in 1942, the year he became our third conductor. The photo is housed in the Toronto Archives.