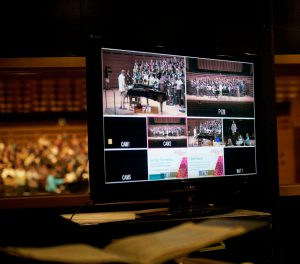 In 2012 the TMC found a way to tour its music internationally (without the high airfare) and make choral concerts more accessible – webcasting.  TMC webcasts have brought great choral music to people unable to attend concerts – whether they be in the Toronto area, or living somewhere across Canada, or anywhere in the world with internet access. Choral-music lovers or those new to choral music have viewed our concerts from the U.S., Europe, South America, Asia and Australia. Stats from 2016 to 2019 show that over 16,000 viewers have enjoyed part of a TMC concert, either watching it live or watching the archived recording.

A Festival of Carols webcast viewer commented:
“We were watching from NW British Columbia where we simply have no access to these type of concerts. It was simply breathtaking to experience it live.”

Our concert webcasts have also been a way to get the work of emerging conductors out there – we webcast our annual Choral Conductors’ Symposium concerts which each featured five emerging conductors. Our webcasts also regularly include our “conductor cam” to give viewers a different way to see the work of the conductors that you don’t get to see in the concert audience.

Over the past two years, we’ve had webcast viewers from:

Since 2012, the TMC has webcast 19 concerts, broadcast from Yorkminster Park Baptist Church and from Koerner Hall. There are currently 14 archived concerts – from Christmas concerts to German Romantics, Choral Splendour, and Spotlight on North America – to  watch on the TMC’s Livestream page. Sit back and enjoy a great choral music concert wherever you are.

The TMC’s Festival of Carols concerts have proven to be popular webcasts.  Here’s an excerpt from one, where the Choir surrounded the audience in Yorkminster Park for Healey Willan’s Hodie, Christus natus est.