Supriya Nayak is an Odissi dancer from New Delhi, based in Toronto since 2015. Odissi is a dance form from the state of Odisha in eastern India that draws its movement and repertoire from sculpture, painting, literature, theatre, and ritual practices. Supriya’s work has been built upon years of training, first under Kiran Segal (1992-96, 1999-2013) and subsequently under Ambika Panikar and Aloka Paniker (2013-present). Since 2015, Supriya has trained in the Alexander Technique under Elaine Kopman and Howard Bockner, which has enriched her practice. She has an MA in Modern Indian History from Delhi University (2006).

Supriya choreographed and danced to Kannamma for the TMC’s Thanksgiving 2020 program. 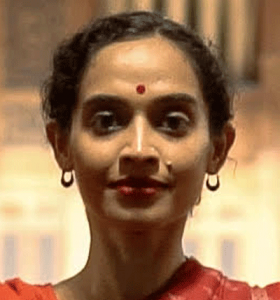