Christmas may not yet be white, but at least we’re starting the season right

It’s an unfortunate truth that when you work in advertising (as I do) that Christmas actually starts in July, as that’s really when you begin planning for the season. So, as December finally rolls around, you can imagine it can be a challenge to muster up some festive cheer.

My companion, too, had told me earlier about the garland she had purchased in an attempt to make her home a little more merry and bright, only to have it fall two feet short – an apt metaphor for both of our moods, if you would, and compounded by the still-conspicuously green landscaping of our meeting spot.

Fortunately, we were about to step into Yorkminster Park Baptist Church for an evening with the Toronto Mendelssohn Choir for their Festival of Carols, which we felt certain would keeping our encroaching Scroogery at bay, and we couldn’t have been more correct.

From the very beginning, heralded by the iconic pa-rum-pa-pum-pum of “The Little Drummer Boy,” the performance explored every mood of the season. There were bright, cheerful Christmas classics, punctuated with bold brass interludes that were arranged with enough distinction to perk up your ears, but not so much as to render them unfamiliar. There were thoughtful, meditative hymns that explored the more spiritual side of the season filled with lush, layered vocals. Of course, there were also some moments of audience participation – largely expected when you attend an evening filled with carols – and while they took away a little from the choral performances, they certainly were fun. Then again, how could the rest of us compete with the power of the choir? We all may have the numbers, but certainly not the talent.

The curation of the evening’s songs was nearly flawless, with one exception; the penultimate performance, Santa Claus Is Coming to Town, felt a little out of place with its a capella styling. The choir is at its strongest when they are either highlighting groups or united as a whole, and the layered approach caused their beautiful voices to become overshadowed by the church’s organ, which was a strange choice for accompaniment, given its volume, power, and the presence of a brass band.

In an evening filled with fine performances, two in particular stood out. The second performance of O Magnum Mysterium, featuring the Elora Festival Singers, was staggering in its precision and deceptively simple arrangement. From the first moment to the final shimmering note, it held the entire church captive as we all collectively held our breath. Finally, after we approached the end of the evening, we were treated to an encore featuring a truly epic performance of Handel’s Hallelujah Chorus, which rightfully demanded thunderous applause from the audience and left those of us without tickets to the upcoming performance of Messiah questioning our life choices.

From start to finish, the Festival of Carols hit all the right notes, striking a fine balance while taking us on a journey that was at once nostalgic, spiritual, and exuberant – each song eliciting a different collective reaction from a rapt audience. As my friend and I headed out into the night, the ground was wetter, not whiter, but we definitely felt as if we left filled with the Christmas spirit; certainly more than what we had arrived with. The Mendelssohn Choir was exactly the injection of festive cheer we needed, a nip of eggnog for the heart. 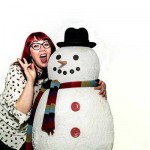 Helen Androlia is a Toronto-based whiz in social media and marketing strategy who has a lot of opinions. She’ll stand by all of them.