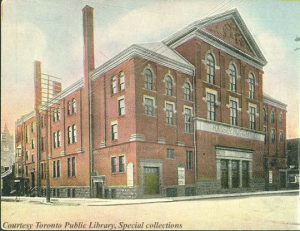 Massey Hall (named Massey Music Hall when it opened) and Toronto Mendelssohn Choir were both born in 1894 and have been part of each other’s lives and the life of music in Toronto ever since. Designed by Cleveland-based Canadian architect Sidney R. Badgely, it was constructed of brick under the supervision of Toronto architect George M. Miller at a cost of $150,000. Its interior design, in the Moorish Revival style, was inspired by the Chicago Auditorium and the Alhambra Palace in Granada, Spain.

The TMC performed its first concert there in 1895. Some other notable TMC concerts at Massey Hall: In 1902 the Choir gave is first concert accompanied by a symphony orchestra – the Pittsburg Orchestra under Victor Herbert; in February 1915 the Choir gave a free concert for the troops of the Second Canadian Contingent; in 1942 Herbert Fricker (2nd conductor of the TMC) gave his farewell concert, choosing his favourite work Bach’s B Minor Mass; and in 1965 Elmer Iseler made his debut as TMC’s 6th conductor with 400 performers in the Mendelssohn Choir Festival of Choral Music. The Choir continued to perform regularly at Massey Hall until 1982 when it moved with the TSO to the newly opened Roy Thomson Hall.

What else could you see at Massey Hall over the years? According to the Canadian Encyclopedia: “There were movies, silent and sound; regular boxing matches; visits by touring opera, ballet and theatre companies; annual May Festival Concerts (begun in 1894) by Toronto school choirs; countless folk, rock, jazz, choral, and symphonic concerts; recording sessions by the Toronto Mendelssohn Choir during the 1950s; and performances by the world’s finest orchestras, including the Berlin, Vienna and New York Philharmonics, the Cleveland and Philadelphia Orchestras, the Concertgebouw of Amsterdam and the Royal Philharmonic of London. Oscar Peterson and a 13-year-old Glenn Gould made their Massey Hall debuts within weeks of each other in March 1946. A legendary jazz concert at Massey Hall on 15 May 1953 marked the only time that Charlie Parker, Dizzy Gillespie, Bud Powell, Charles Mingus and Max Roach ever played together (it is considered by some the greatest jazz concert ever).”