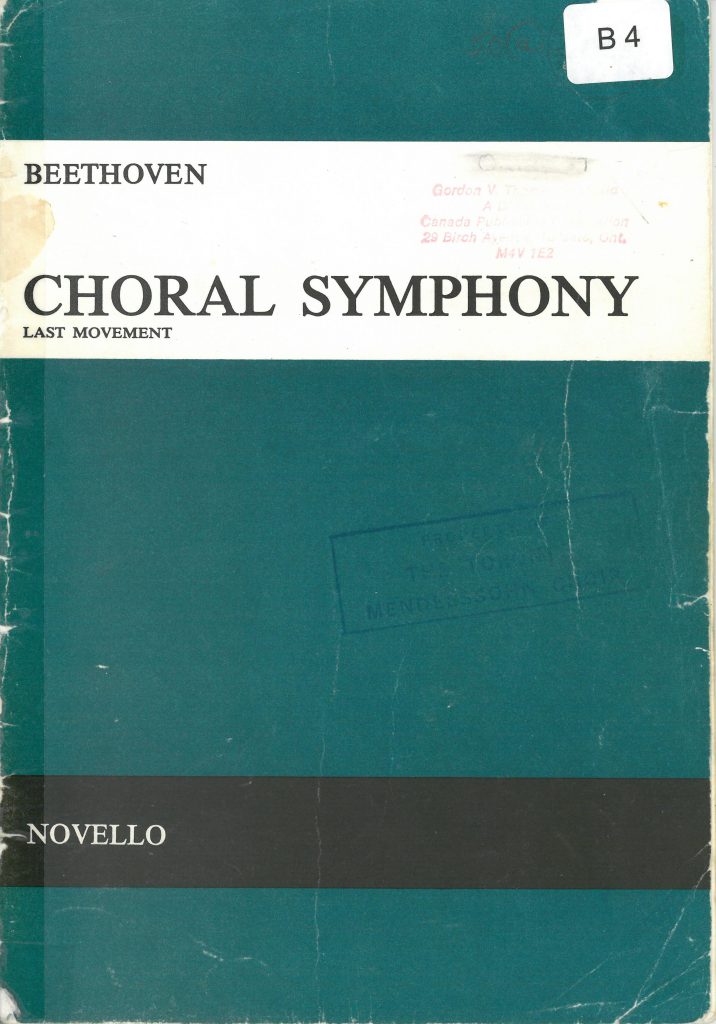 The Mendelssohn Choir toured to the United States a number of times in the early 1900s, with its first U.S. concert given in Buffalo in February 1905. It was a 1906 performance of Beethoven’s Choral Symphony that cemented the Choir’s reputation in the States.

In February 1906 the Choir performed Beethoven’s 9th Symphony with the Pittsburgh Orchestra under conductor Emil Paur.  Here’s how the reaction to this concert was described by Hector Charlesworth in The Toronto Mendelssohn Choir – A History 1894-1948. (Charlesworth had been Editor and Critic at the Toronto Mail and Empire and went on to be chair from 1932 to 1936 of the newly formed Canadian Broadcasting Commission.)

“The climax of the Choir’s earlier achievements up to that time was reached when it was decided to present Beethoven’s Choral Symphony. Dr. Paur, who had conducted the work in Germany, had been extremely anxious to do so in America, but until he came into association with the Mendelssohn Choir had been unable to find a chorus equal to the task. Those who listened for the first time to this great work will never forget that night in February of 1906 when the full splendour of the achievement dawned on them. Such of Dr. Vogt’s friends as were acquainted with the history of the Choral Symphony had been dubious as to whether he could train his choristers to the pitch of excellence that was demanded. Afterward, Dr. Paur, who conducted, admitted that there was no choir in Europe which could have sung it so well.”

In 1907 the Choir traveled to New York for its Carnegie Hall debut. Charlesworth noted: “The fact that the organization could sing the Choral Symphony, which was almost as great a novelty there as in Toronto, was in itself an inducemnt. This work was the feature of the series.”

The TMC made a striking impression with critics on its U.S. tours to New York and Buffalo. Here are some of the ecstatic reviews:

“Napoleon Reincarnated, and creating harmony in sound in place of the discord of wholesale death, such is Mr. A. S. Vogt, whose now famous Mendelssohn Choir is to the average choir as a Stradivarius violin is to a hillbilly’s banjo.” – The Buffalo Commercial

“The Mendelssohn Choir so surpassed, in almost every detail, any body of singers of its size that we have ever heard, that the listeners gasped. The singing was superb, overpowering. It was a revelation. The audience broke into a tremendous shout. It is a wonderful chorus: perhaps the finest in the world.” – The New York Press

“The choir sings with a superb body of tone, with glorious spirit, with enthusiasm, with beautiful nuance, with fine enunciation, and with most artistic phrasing. The balance of tone was perfect. It may be said without reservation that better choral singing has never been heard in New York.” – The New York Sun