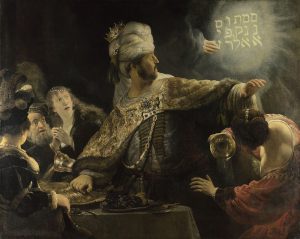 The Toronto Mendelssohn Choir presented the Canadian premiere of Sir William Walton’s Belshazzar’s Feast on February 13, 1936 in Massey Hall with guest artists the Toronto Symphony Orchestra and under conductor Dr. Herbert Fricker (the Choir’s second conductor who took over from Augustus Vogt in 1917).  TMC also presented the Canadian premieres of many other great choral-symphonic works including Ralph Vaughan Williams’ Sea Symphony in 1921, Hector Berlioz’s Requiem in 1938, Benjamin Britten’s War Requiem in 1964, and Krzysztof Penderecki’s St Luke Passion in 1971.

In music critic Augustus Bridle’s review of the Choir’s Belshazzar performance in 1936 in the Toronto Daily Star, he wrote: The choir capped all its climaxes of devastating discords in the first performance in Canada of “Belshazzar’s Feast” by Wm. Walton, English composer. All the dissonances this choir has ever sung in 20 years of modern music are “Sweet and Low” compared to this prolonged proxysm of scale-shattering frenzied misereres.  As a tone-picture of modern international politics, this orgy of voices and orchestra is a masterpiece. Its text is the triumph and tragedy of destroyed Babylon, based on the handwriting on the wall, “Mene, Mene –“. Its musical technique eclipses even the savagery of the text.  It was a bold act to tackle such a work. But if the Mendelssohn Choir had been afraid of it, what hope for any other choir in America?

The TMC last performed Belshazzar’s Feast in 2017 with the Toronto Symphony Orchestra and Huddersfield Choral Society.

This famous painting of Belshazzar’s Feast by Rembrandt is found in the National Gallery in London, England.