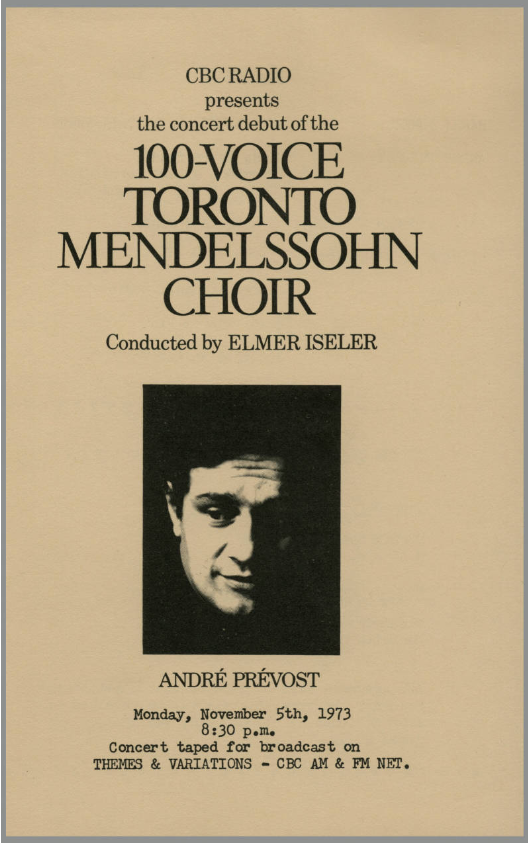 In 1973 the CBC commissioned Canadian composer André Prévost to write a work to be performed by the Toronto Mendelssohn Choir under Elmer Iseler, and broadcast on CBC Radio. Missa de Profundis was performed on November 5, 1973 by the newly-formed 100-member choir pulled from the ranks of the full Toronto Mendelssohn Choir. This “choir within the choir” included 38 Festival Singers (the professional core) and 62 other TMC choristers. Elmer Iseler created this group to be used in certain venues and for certain works better suited for smaller choral forces. This tradition of a smaller “choir within a choir” for certain works and venues continues today with the Mendelssohn Singers, a group of 70 singers composed of 20 professionals and 50 TMC volunteer choristers.

André Prévost (1934 to 2001) studied composition, harmony and counterpoint and went on to join the Faculty of Music at the University of Montreal. He composed more than 50 works, the majority of them commissions from orchestras and other organizations, including the CBC. He was named an Officer of the Order of Canada in 1986.

We found this front page of the CBC concert program (and in fact the full program) in the University of Calgary Libraries and Cultural Resources Digital Collections. You can look through the full program here.