The TMC had its best concert results in ten years, with three out of five performances sold out (two Passio performances and Sacred Music for a Sacred Space), and an average 92% of house for the season.  This is an increase over previous seasons because of consistently strong houses for all 2014/15 performances.  In reporting results to the TMC Board of Directors, Artistic Director Noel Edison commented that, “we took a risk with some of our programming, but the audiences came out in droves.  There appears to be a real need for people to connect with something beyond their everyday lives—a spirituality of sorts. ”

TMC concerts in 2014/15 inspired, moved and uplifted audiences.  The TMC, as part of the Chorus America Intrinsic Impact research project, surveyed concert patrons to its five ticketed performances.  One of the questions asked patrons to provide words that best described how the concert made them feel.  See below for a word cloud that captures the top 150 words with which patrons responded (the larger the word, the more times it was mentioned).

The Toronto Mendelssohn Choir isn’t finished singing for 2014/15. The Choir will perform Verdi’s Requiem and Mahler’s Resurrection Symphony with the Toronto Symphony Orchestra this spring as well as R Murray Schafer’s Apocalypsis as part of the 1000-musician group brought together for the Luminato performance in June.

The Toronto Mendelssohn Choir will announce its 2015/16 season shortly. Visit www.tmchoir.org  for updates. 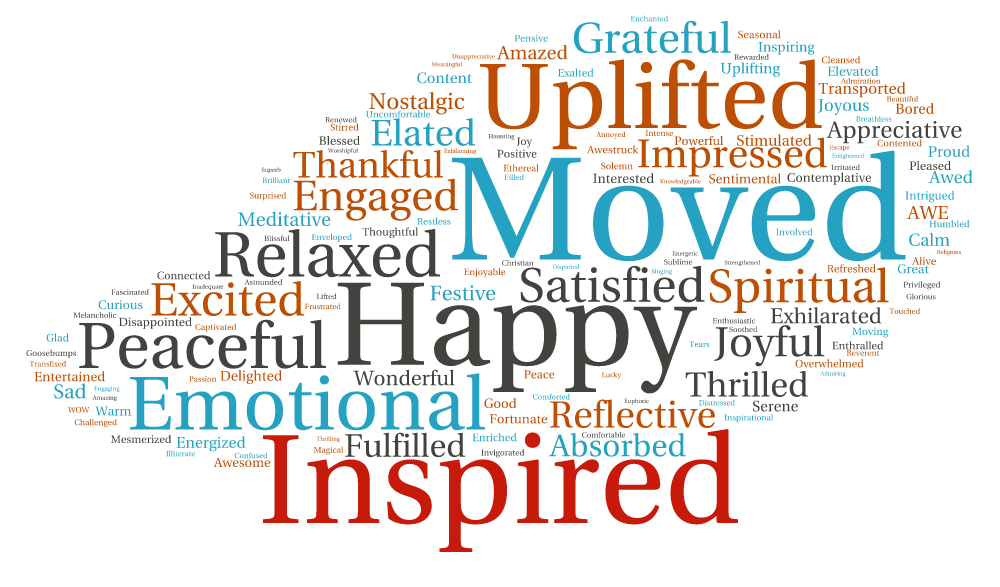 Word Cloud created from patron responses to the question: “What words best describe how the concert made you feel?” In total, 634 TMC patrons completed the online survey following four concerts in the 2014/15 season: Mozart/Haydn; Festival of Carols; Passio (2 nights); and Sacred Music for a Sacred Space.