At the Toronto Symphony Orchestra, Simon Rivard is mentored by Music Director Gustavo Gimeno. In addition to leading concerts throughout the season, he has been assisting world-class conductors such as Sir Andrew Davis, Peter Oundjian, Donald Runnicles, Jukka-Pekka Saraste, John Storgårds, Barbara Hannigan, Xian Zhang, and Eun-sun Kim. Since 2019, he has been an Equilibrium Young Artist, as part of Canadian soprano and conductor Barbara Hannigan’s internationally acclaimed mentorship program for early-career professional musicians.

As a guest conductor, Simon Rivard has conducted orchestras in North America and Europe. He recently made his début with Orchestre symphonique de Québec, Orchestre symphonique Sherbrooke, and the Gothenburg Symphony Orchestra. In February 2022, he made his début at the Edmonton Opera in Puccini’s La Bohème. He also recently collaborated with celebrated Toronto-based opera company Against The Grain, in Holst’s Sāvitri.

In 2018, he was invited to participate in the first Conducting Mentorship Program at the Verbier Festival Academy (Switzerland), at the conclusion of which he was awarded a Special Prize.

In 2017-18, Rivard served as Resident Conductor of the Thunder Bay Symphony Orchestra (Ontario, Canada). In 2017, he stepped in for Jean-Philippe Tremblay as Music Director of the Orchestre de la Francophonie. 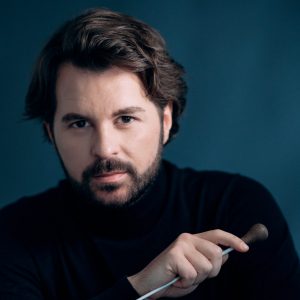